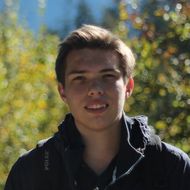 
Republic of Daghestan (Northeast Caucasus, Russian Federation) is a zone of high language density, where a score of different languages are spoken on a relatively small territory (~50.000 km2), most of them belong to the East Caucasian (alias Nakh-Daghestanian) language family. The area is surrounded by territories speaking much larger languages, including Azerbaijani, Georgian and Chechen; some Turkiclanguages are also spoken within Daghestan. Naturally, there is a rich history of inter-ethnic communication and multilingualism, and a stock of literature that deals with identifying loans from a particular source to a particular target language (or group of languages) for historical comparative purposes. So far, no systematic attempt to measure the amount of matter copy from different sources and to compare the intensity of inter-ethnic relations has however been made. We describe a method that provides a robust assessment of the amount of lexical influence so that it can be compared across languages. For  Daghestan, it leads to isolating local zones of intense contact, southern Daghestan identified by a high level of Azerbaijani influence and northern Daghestan identified by a high level of Avar influence. Interestingly, no strong influence from Georgian or Chechen is detected, probably explained by confessional and doctrinal differences. Importantly, the results correlate with the data on traditional patterns of bilingualism, now ousted by the use of Russian as a lingua franca. Loanword list collection thus provides a window into the past of interethnic communication. Though the short list of nouns has been tailored especially for the languages of Daghestan, by adjusting the list the method as a whole can be transferred to other areas of intensive multilingualism.
Рубрики
Наука
Темы
исследования и аналитикарепортаж о событии
В статье упомянуты
Лингвистическая лаборатория по корпусным технологиям